In its Bach Cantata Program, St Johns Southgate presents an ongoing series of services incorporating the choral music of J.S. Bach. The cantatas are presented in their intended context, liturgical Lutheran church services. The services include congregational liturgy and chorales, and organ music on the 1992 Knud Smenge pipe organ.

The program was founded in 1997 and 2019 is its 22nd liturgical year.  The series has presented over 125 different cantatas and most of Bach’s major choral works in over 190 events.

The program is organised on a rolling basis.

In 2020, the program will feature the nine JS Bach cantatas with texts by the 18th century progressive poet, Christiana Mariana von Ziegler.

Translations and notes on Bach cantatas are available here.

Services include an opportunity to make offerings and donations to support the St Johns Bach Program, or you can make a tax-deductible donation through the St Johns Southgate Bach Foundation.

Free parking (up to a limit) is available at all service times.

The St Johns Bach Choir is a selected/auditioned semi-professional choir formed in 1998 for the Bach Cantata Program.  Many of its members participate in other fine vocal ensembles in Melbourne. To express interest in joining the choir, contact the church office. 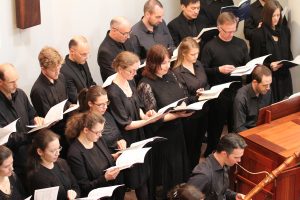 The St Johns Bach Orchestra draws on the pool of highly skilled period instrument players in Melbourne and Australia. It was formed under the directorship of Dr Graham Lieschke to support the Bach cantata program, and is now one of the most established period baroque instrumental orchestras in Melbourne.  Its core of regular players is joined from time-to-time by local and international visiting artists. 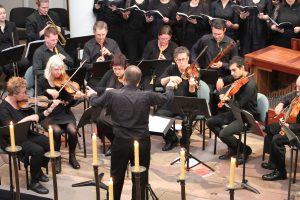 Bach Cantata Services suspended until further notice. It is hoped to resume the program in Spring 2020.

Bach Cantata Services suspended until further notice. It is hoped to resume the program in Spring 2020.